U is a lamelaphone (that's the generic term for instruments with vibrating tines) in a U-shaped configuration. For each pitch there is not one but many tines in a row, tuned mostly in octaves, which can be played by stroking with a plectrum across the row for an unusual glissy-tremolo multi-octave tone.

U is glissy lamellaphone. Rather than having one tine for each note, U has 14 closely spaced tines per note. Each note’s group of tines is tuned in octaves and fifths across a range of three or four octaves. You sound the note by stroking with a glissing action across the array of tines for the chosen note, using a thin stick-like plectrum. There are twelve such groups forming a chromatic scale. Since each group spans several octaves, you can play melodies spanning more than one octave by emphasizing the higher or lower tines as needed within the groups. The tines are made of narrow stainless steel machine screws, tuned by adjusting the length using the hex nuts that secure them at the base. In addition, most of the screws are overtone-tuned by means of additional hex nuts serving as adjustable weights along the length. The instrument can be laid across a specially configured styrofoam chest, in which case the styrofoam does an excellent job as a soundboard, taking the vibration and projecting it out into the air. Or it can be played upright on a stand which includes an easily attached piezo system for amplification.


Curator note Bart exhibited and performed with Pet the Tiger at the very first Maker Music Festival in 2018. We were thrilled to have him there and, now, to have him here.


Side story Very short story:
A while back I found a washer in the dryer.
(I must have absent-mindedly put in it my pants pocket while working in the shop.)

U was a demanding instrument to make, time-wise, because the tuning of the individual tines -- both the fundamental tuning and the overtone tuning -- was a painstaking process, and there's a huge number of tines.
How long have you been doing things like this?

Forever.
How much did this cost to do?

U was not expensive to make: the steel bar, the screws that serve as the tines, the hex nuts -- none of these are costly items.
Have you done other things like this?

Yes. In particular, I've been interested in musical sounds in which many quick little percussive sounds gliss together to create the feeling of a sustained tone. You can see examples in the Instrumentarium section of my website (www.barthopkin.com), in particular the several variations on DTF or Disorderly Tumbling Forth, as well as Schmeary Glissary.
What did you wish you knew before you started this?

The process of designing and building new instruments is typically full of learnings that could fit the "If only I had known" paradigm. This particular instrument, however, unfolded pretty much as hoped.
Are there plans available to make this? Do you sell this?

No formal plans available. If anyone is interested in making one of these or something similar, I'd be happy to chat about it if that's helpful. I do make instruments on commission sometimes, but this one would be rather costly because the tuning of the tines, as described above, is so time-consuming. I can be reached at emi@windworld.com.
What’s next?

The tools and materials for this particular instrument are commonplace and widely available. The main resource I drew on in designing and building it was many years of experience in doing this sort of thing. 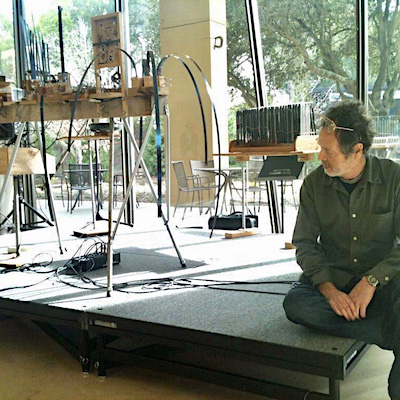 I'm a maker of musical instruments and a student of musical instruments worldwide. I was the founder and editor of the Experimental Musical Instruments quarterly journal, I've written string of books on various topics in instrument making, I've done a bunch of teaching, and I'm one of the curators for the Window Gallery at Center for New Music in San Francisco. Over the years I've designed and built a ridiculous number of instruments.