Radiotone is an X-ray synthesiser which brings together Giorgio Sancristoforo’s fascination with radioactivity, scientific experimentation and the sonification of natural phenomena. 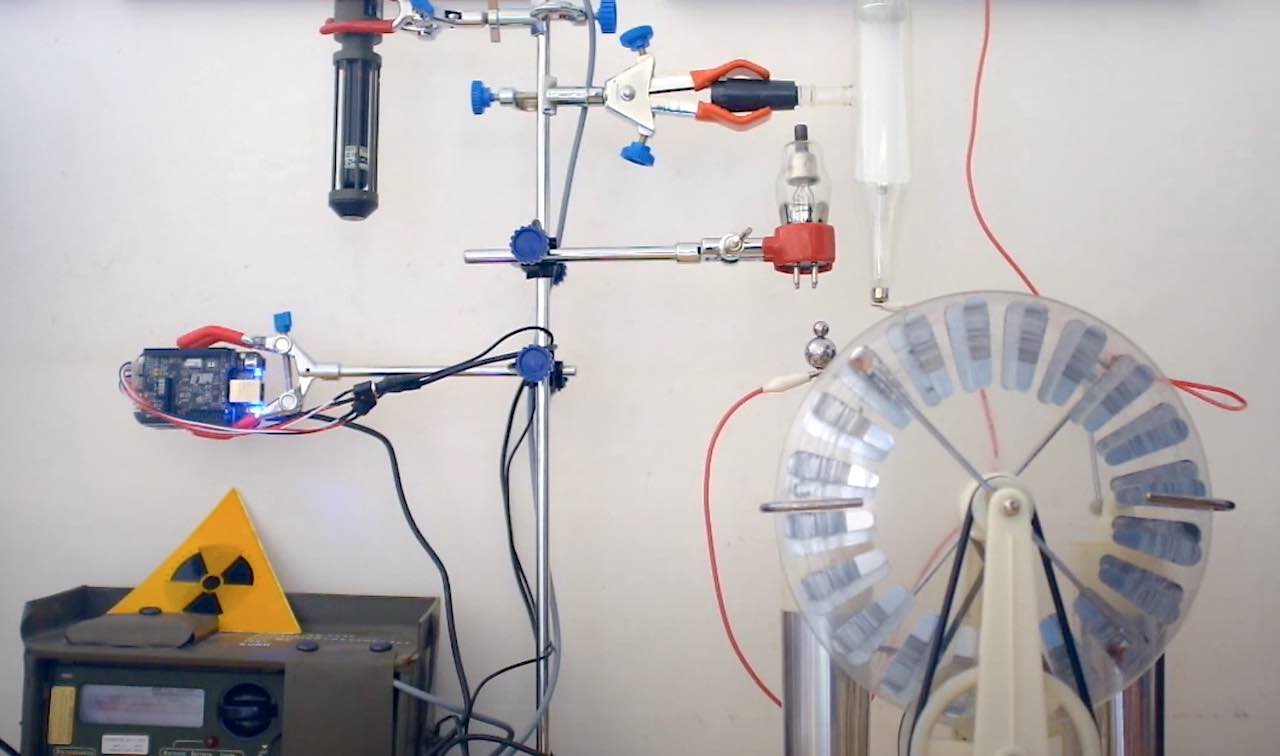 Giorgio Sancristoforo is an artist and software developer who defines his work as following a sci-art aesthetic. His output is extensive and varied, from software recreations of machines that made up the Rai Studio di Fonologia (Italy’s Radiophonic Workshop in Milan which was established in 1955 as a place for exploring experimental electronic music in line with the GRM in Paris and WDR in Cologne), to synthesisers that use astrological data streams of the orbital patterns of the moons in our solar system to control the parameters of the instrument. We highly recommend having a deeper look at his work on his website but in this post our focus is on Radiotone. Taking inspiration from the discoveries of William Crookes and Wilhelm Röntgen, the Radiotone is a one-of-a-kind synthesiser that uses X-Rays to control and shape sound.

There are four core components to this instrument which can be seen in action in the above video: high voltage generation via a Wimshurst machine; x-ray generation via a Crookes’ tube; x-ray detection via a military-grade Geiger Counter; sound synthesis via Bela.

Since 2006 he has written softwares for education and experimental music used by artists and teachers in more than 40 countries worldwide, among them, names like Curtis Roads, Ben Frost, Ryuichi Sakamoto, Richie Hawtin, Robert Lippok, and institutions such as Stanford’s CCRMA, the BBC Radiophonic Workshop, the Royal College of Music of Stockholm, the TUFTS University, the San Diego City College, the Centro National de las Artes of Mexico City.

His work in experimental music research has obtained the respect and appreciation of numerous composers, musicians and professors in the academic field. He became member of the AGON Contemporary Music Centre in 2010, founded by M° Luca Francesconi and M° Pietro Pirelli, and he’s member of the Prisma International Composers’ Group since 2015.

His work in music research led him to create two new sound synthesis techniques: the TAMS Tri-Axis Modal Synthesis, and the Tropical Additive Synthesis: the first technique of computer music which uses a non-standard mathematics (Tropical Algebra), developed together with the Italian mathematician Prof.Cristiano Bocci, of the department of Mathematics of the Siena University.

His artistic practice is focused in the relationships between science and art, specialising in multimedia installations, soundscape, algorithmic music and radioactivity imaging, with a special interest in genomics and nuclear physics.