The Prism Bell is a new oversized gesturally performed digital musical instrument that sounds like a cross between distorted electric guitar strings and a bell. 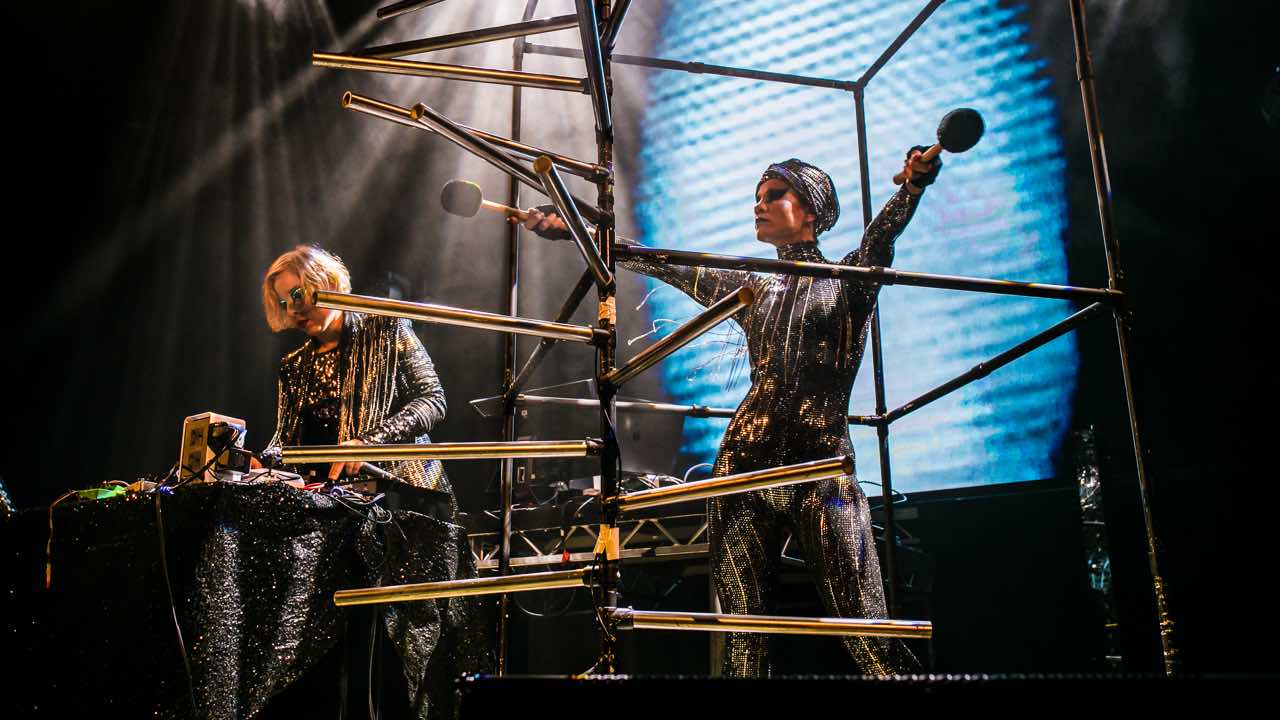 The Prism Bell is a new oversized gesturally performed digital musical instrument that sounds like a cross between distorted electric guitar strings and a bell. Designed by Lia Mice, this instrument is constructed from reclaimed PVC pipes. As the pipes are modular, the shape of the instrument can be changed each time it is performed. Embedded in the pipes are sensors (piezos and/or analog accelerometers) that are connected to a Bela Mini that uses the sensor signals to burst a bespoke physical modelling synth that was created using Pure Data.


The Prism Bell has been performed at:

Mice's latest album The Sampler As A Time Machine is out on Optimo Music. Her unique productions are the result of years of studio experimentation with technology old and new including analog samplers, Max/MSP, self-hacked instruments and 8-track tape. Mice's all-hardware live AV sets incorporate large-scale self-designed instruments and voice sampling with dancers and audio-reactive visuals. Her high energy DJ sets explore the weirder side of electro, tech-noir, acid and experimental-pop. has guested on NTS and Rinse FM, and co-hosts with Janine A'Bear a monthly Threads Radio show called EastBlenders.

Mice is a recipient of numerous residencies: Innovative Instrument Design Duxianqin International Workshop at China Conservatory of Music, Estalagem Residency for Music and Electronics at Ponta Da Sol Madeira, Automation and Me at Leeds International Festival, and Goldsmiths Palermo Summer Intensive Performance Practices in Sicily. Her work has been exhibited and performed internationally at events and venues including Ars Electronica, The Tate Modern Tate Lates, The Barbican Archives Residency, The V & A Museum Digital Design Weekend and Museum of Arts and Design. As a researcher, Mice has presented her work at IRCAM Forum, Computer Music Interdisciplinary Research, Technology in Music Performance and the International Conference on New Interfaces for Musical Expression (NIME).

Mice's music has appeared in feature film (Viral Beauty), TV (Hiding) and Mice has composed original soundtracks for short films A Quiet Room In Walthamstow and Every You/Every Me.

Mice is an advocate for accessible design and is herself monocular sighted with double vision that requires her to cover one eye. Since moving to London in 2015 she has founded Electrolights AV - an experimental platform highlighting audio-visual artists and performers, and Electrolights AV Studios - a shared A/V studio space in Peckham.