Phonoharps use the turntable both as a source of sound, and as a way to directly amplify the vibration of the strings. 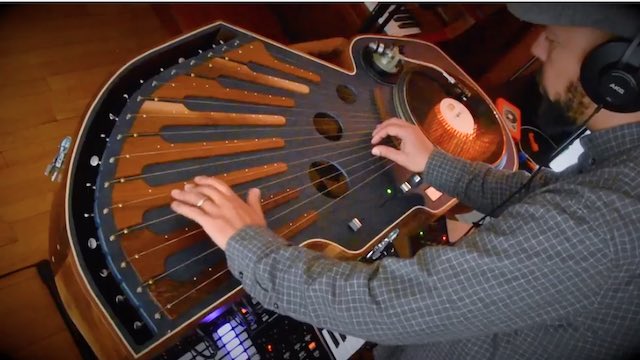 This Phonoharp built in January of 2017 is the first to feature solid wood construction. Made of walnut with a border of inlayed holly, this instrument is a refined version of the Steel-stringed Phonoharp (right) Kitundu made 14 years earlier.

Walter Kitundu has been affiliated with the Exploratorium Museum of Science, Art, and Human Perception since 2003, where he is currently a senior designer. His work has been exhibited and performed at such national and international venues as the Singapore Science Centre, the Gunnar Gunnarsson Institute, Iceland; the Walker Art Center, the Museum of Craft and Folk Art, and the Aukland Arts Festival in New Zealand. In 2008 he became a MacArthur Fellow.