Perripplayear is a musical immersive comprovisation for N remotely comprovising musicians and any instrumentation in a virtual 3D world. Initially, it was meant to be presented during the Network Music Festival in July 2020. Since then, it was presented in several other contexts. It is performed by the Kaon'CPTs Collective. 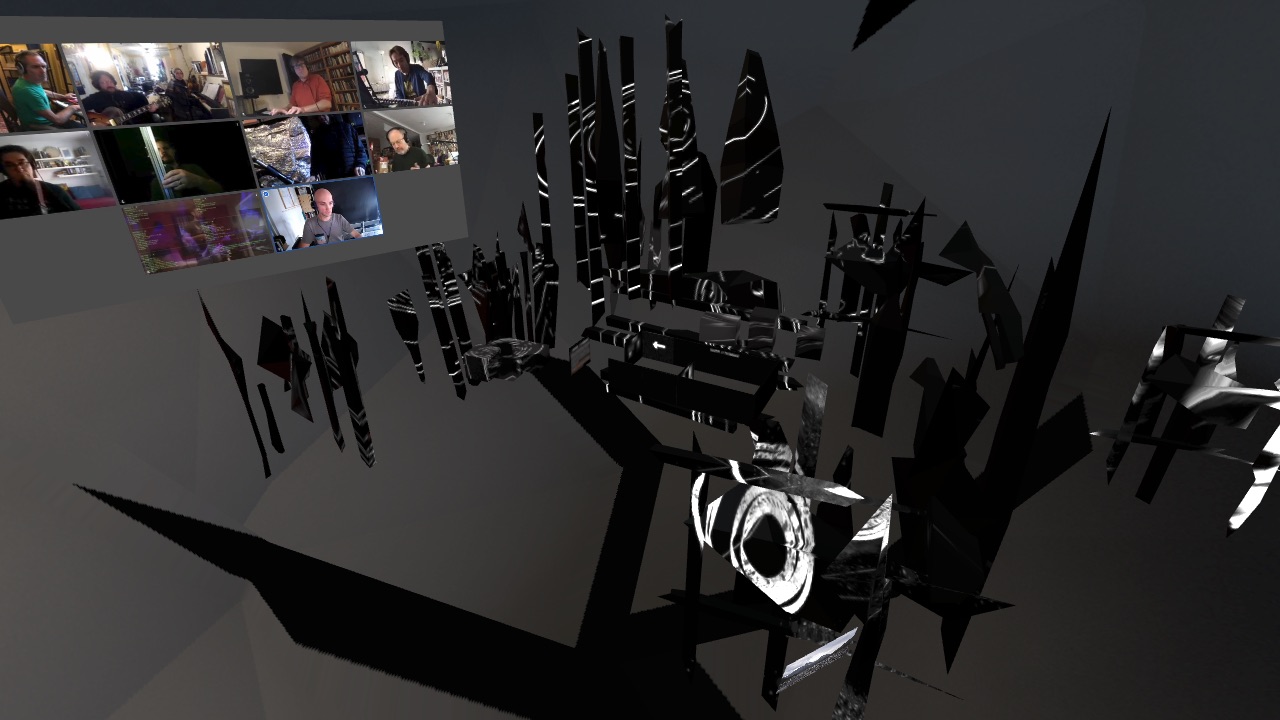 A musical immersive comprovisation for any number of remotely comprovising musicians and any instrumentation.

This comprovisation explores musical texture through balancing networked delays and network enabled feedback. It reposes on the awarness that networked musicians can experiment together when geographically distant and connected through network. Their sense of "togetherness" (in musical and extra-musical terms) will depend, among other things (and possibly principally) on the software they use to play together. This piece explores a social experience of remotely partaking in music making, simultaneous use of different types of software, more or less adapted to music, in order to deliver an audio-visual performance, with virtual choreography, public participation and feedback.

The immersive performance takes place inside a virtual world hosted in a Mozilla Hubs scene. The audience joins into the Hubs world (via smartphones, tablets, computers, even VR headsets). The musicians are also present in the Hubs world (as avatars).

The musicians, each in a different geographical location, connected to the network, play together using a software made for that purpose, offering reasonably low latencies (i.e. ninjam, jack-trip, jamulus or similar). They all follow a score that is designed to allow for improvisation and sonic experimentation. It also offers each musician moments of silence and instructions to perform certain actions in the global choreography (i.e. change his/her avatar position, start/stop stream, activate/deactivate some software or device). Their synchronized audio is mixed down and offered as a stream to twitch.tv along with a synchronized video feed of the score (or some other pertinent and appropriate visualization). The musical base will focus on texture, alternating between cued events (surrounded by silence), rhythmic passages and ad lib. ripples, sections of indefinite duration of diverse layers of textures.

The aforementioned twitch.tv feed is streamed inside a Mozilla Hubs virtual world and becomes the main source of audio-visual content for the audience. After some time, the musicians activate their own cameras and direct audio signals. They continue performing the scored piece, but now the audio signals are completely desynchronised with the twitch TV as well as between themselves. During the performance, each musician will move his/her avatar to a different place in the scene, thus offering a shifting "spatialization" for the audience (because sound sources are spatialized in stereo or binaural manner in Hubs). After some more time, the participating musicians (and perhaps some "friendly" audience members) will capt the mixed audio of the entire scene and re-transmit it as other twitch feeds back into the Hubs. The audience will be invited to open their microphones as well in order to contribute their audio to the entire audioscape.


Side story When In Real Life (IRL) musicking stopped being main stream, we created the Kaon'CPTs collective and moved to online 3D performance space with conducted live comprovisation through interactive scores. Indeed, the COVID-19 pandemic provided a unique context in which we would perhaps not even think about joining forces in a project unless there was an opportunity to be together physically. However, the pandemic has paralyzed many of us and shifted focus towards online activities. Suddenly the Internet became the only way to express oneself and to interact with other people. Perripplayear, the first Kaon'CPTs comprovisation, is a result of this context and brought together individuals that may not have collaborated together otherwise. Ever. 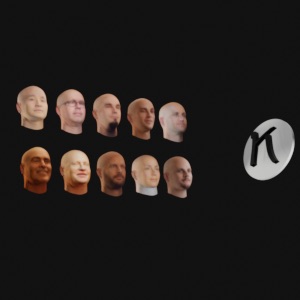 The Kaon'CPTs is a collective dedicated to flip along several time realities. Undecided, their action oscillates, alternates from physical to virtual, hesitates between now, before and later. Previous activities include synchronized network music, implementing timecode-based behaviours and listening to buffer underflows in interactive cyberworlds. Actually, nothing periodically unusual can affect Kaon'CPT's conservation of entropy.

The core members have been operating music together at previous occasions, including collaborations with scientists (The Melatab, at Network Music Festival in 2013) and unmanaged kids (Gaping Fools, since 2007 in garages, caves and living-rooms). Despite some fruitful solo carers, the Kaon'CPTs are inviting friends for musicking sessions.

The energy is bound from below.


Connect with Kaon'CPT
How I can help you:
We love to do things with computers, sounds, networks, virtual spaces, 3D objects and the like. We also love to talk about them. We would also like grow (there are about 10 of us) and create a world, online orchestra.
How you can help me:
Others could come and play with us.