For the seventh consecutive year, Montclair will be one of more than 65 cities across the United States taking part in Make Music Day. 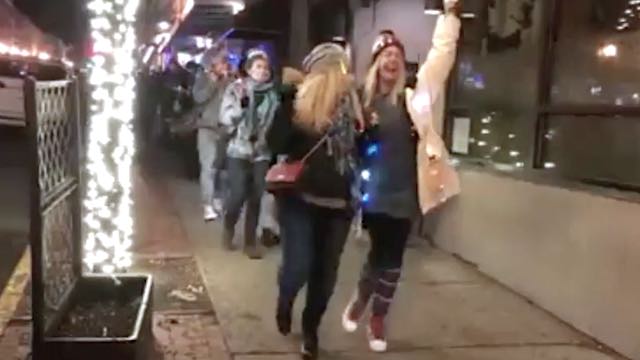 ABOUT MONTCLAIR MAKE MUSIC DAY AND MAKE MUSIC WINTER
Held annually on June 21, Make Music Day is part of the international Fête de la Musique, taking place in 800 cities across 120 countries. Make Music Day is a day where free, live musical performances, opportunities to make music and other musical events take place around the world on the longest day of the year.

For the seventh consecutive year, Montclair will be one of more than 65 cities across the United States taking part in Make Music Day.


MUTANT TOY PARADE & PHIL KLINE’S UNSILENT NIGHT
The Mutant Toy Parade it’s a participatory composition by Argentine composer Laureano Cantarutti. Children and adults are invited to come and experiment with three types of "circuit bent" modified toys, designed by Cantarutti, modified by Alex Muscat and assembled by local musicians and Makerspaces in each city. After a brief rehearsal, everyone will parade through the streets playing music using the toys, hand percussion, and keytars. At the end of the event, participants will get to keep the toy instruments as a holiday gift, and take them home for further experimentation.

Unsilent Night is an original composition by Phil Kline, written specifically to be heard outdoors in the month of December. It takes the form of a street promenade in which the audience becomes the performer. Each participant gets one of four tracks of music in the form of a cassette, CD, or Mp3. Together all four tracks comprise Unsilent Night. The fact that the participants play different "parts" simultaneously helps create the special sound of the piece. Participants carry boomboxes, or anything that amplifies music, and simultaneously start playing the music. They then walk a carefully chosen route through their city’s streets, creating a unique mobile sound sculpture which is different from every listener's perspective.


SCHEDULE/PRE EVENT (from https://www.montclairlocal.news/2021/12/13/itll-be-an-unslient-night-at-make-music-winter-in-montclair/ )
The fifth annual Make Music Winter — the winter version of Montclair’s Make Music Day — is coming on Tuesday, Dec. 21. And for the first time in Montclair, the day full of music will end with “Phil Kline’s Unsilent Night.”

“We’re going to have a series of events starting in the early afternoon, understanding it’s a weekday and people are either working or at school,” said Greg Pason, Montclair Music Day’s event chair and coordinator, as well as director of Indie Arts Montclair. “It’s going to be a fun afternoon of music. All free, all volunteers supporting the community this year.”

Pason said this year’s Make Music Winter will be held around the downtown area because it will be easier for residents to participate in events. It’s being limited to one day to avoid spreading the volunteer team too thin. “It should be fun, and the town seems to embrace it. And it’s a great kickoff for the winter season,” Pason said. Pason also said Make Music Winter is partnering with businesses including Paper Plane Coffee Co. and East Side Mags, and with local organizations including Bike&Walk Montclair and the Montclair Center Business Improvement District.

Make Music Winter will start at 2:30 p.m. at Paper Plane Coffee Co., located at 194 Claremont Ave., with a Holiday Bells Play-a-long led by Barbara Rudy. Participants will be given bells of varying colors. When a flag of the matching color is raised, they’ll play those bells.

“There’s a company called RBI, Rhythm Band Instruments, which donates free instruments to us every year. And we’ve got a bunch of bells,” Pason said. “We’re going to have about two, maybe three songs. And if it works, and it’s conducted right, we will be playing holiday songs.”

MUTANT TOY PARADE: At 5:15 p.m. at Cool Cat Music, located at 314 Bloomfield Ave., the annual parade will start, where participants will be handed electronic instruments made from toys that play electronic music. “We’re going to have a toy steering wheel and some toy dolls, and they are going to be amplified. And they are going to have these electronic volume knobs,” Pason said.
The parade will head toward Crane Park for “Phil Kline’s Unsilent Night,” organized by Charlie Spademan. That performance will start at 6:15 p.m.

“We are really hoping we build some momentum throughout the day,” Pason said. “We use the events to promote the other events. And then by the time we get to ‘Unsilent Night,’ we can bring a nice crew and we have a really nice turnout.” Spademan, a local artist, said he had been attending “Phil Kline’s Unsilent Night” for the three years in Manhattan, and he said he thought of bringing it to Montclair. “It has nothing to do with religion. It’s strictly about community,” Spademan said. “And it seemed like, particularly with the pandemic and not being able to really gather in large groups inside, this is an outside event and there’ll be a lot of room to spread out.”

At 5:30 p.m. volunteers will be available at Crane Park to help participants download the four tracks, which can be done through unsilentnight.com/participate. Participants are also encouraged to bring their own Bluetooth speakers and deck out their cold weather outfits with lights, glow sticks or anything else that is festive.“Some people bring big, loud speakers pulled on wagons or they have music horns up on top,” Spademan said. “Also, as far as all ages, people come and pull small kids on wagons or push them in strollers also decked out with lights. It’s absolutely for everybody.”

“To enhance the true solstice spirit even further, we are encouraging participants to ‘light up the night’ by adding colorful lights of all kinds to their bodies, bikes, blades and boards,” the group said.

“Phil Kline’s Unsilent Night” will last approximately 45 minutes, Spademan said. He said that the exact route is not ready yet, but the parade will start at Crane Park and end at the new Wellmont Arts Plaza.

He said the route will definitely include Church Street, but might include some quieter areas as well, and even perhaps a parking deck “because I think that the acoustics going through there might be really interesting.”


EVENT – image descriptions - (from https://www.montclairlocal.news/2021/12/24/montclair-buzzed-with-live-tunes-for-make-music-winter-photos/ )
Make Music Winter, the winter version of Montclair’s Make Music Day, filled the streets with live music Tuesday, Dec. 21, capped off with the evening performance of “Phil Kilne’s Unsilent Night.”
Make Music Day is an international celebration, in which performers throughout a community all, well … Make Music.
For this year’s winter edition in Montclair included performances at Paper Plane Coffee Co, and East Side Mags, Trend Coffee & Tea and Crane Park. For “Unslilent Night,” participants marched through the streets of town playing prerecorded tracks that, together, made up one composition. And in the evening, during that performance, Bike&Walk Montclair held its Blinky Light Bike Ride, making the season bright.