A playable sculpture made from various reclaimed materials. 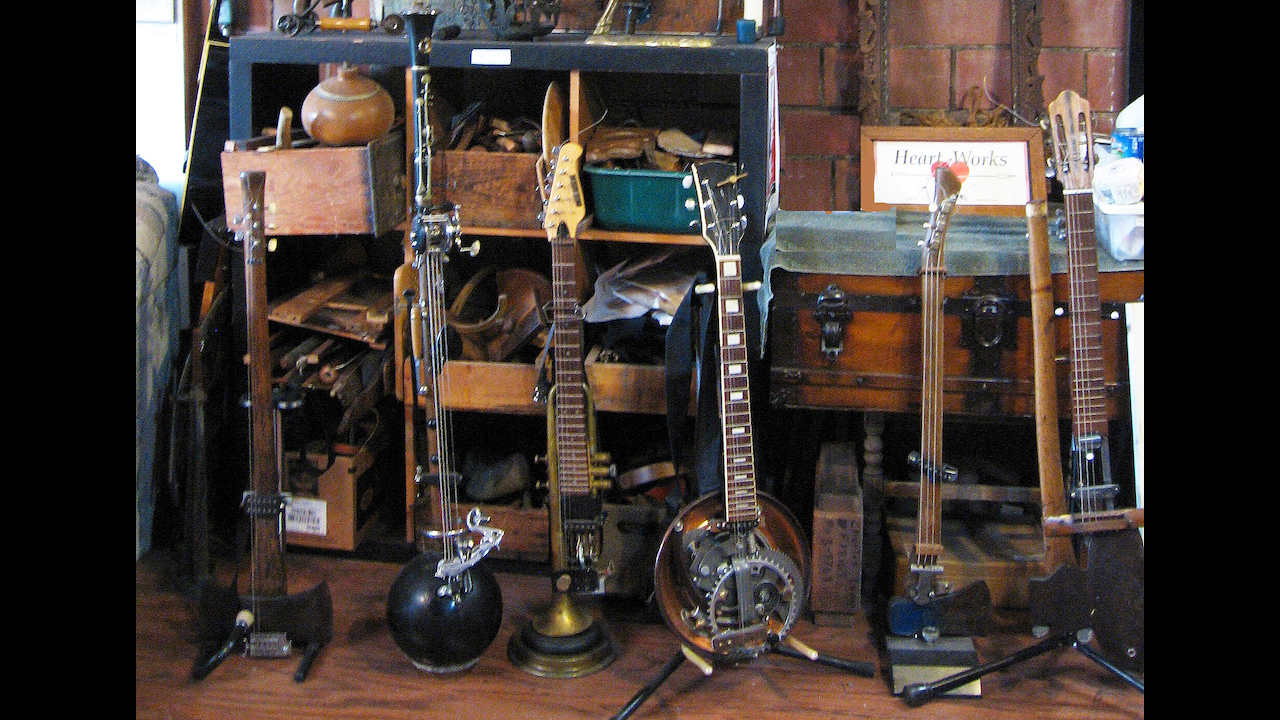 And every once in awhile the pieces talk back to him. You might even call it music.

"The cool thing about sound and music versus the assemblage is that this is immediate, you know -- whack! Sound, there it is," he says. "It's spontaneous. It's right there. It's not mind-screw, plodding, where it gets very complicated in a three-dimensional way. . .. With this, it's really fun for the end result to be something that makes sound."

Wearing a worn 49ers hat, he's standing in his studio behind his Santa Rosa house, surrounded by tons of prized salvage squirreled away in nooks and hanging from the rafters. The maestro just finished sawing away at his "Bowling Ball Bass" -- an amalgam of strings and things. A clarinet gives way to a saltwater fishing reel, violin parts and a bicycle brake, all rooted in a worn black bowling ball.

When amplified, its underwater echoes conjure eerie soundtrack music at home in any David Lynch film. Nearby, "The Axe" -- literally a rusty tree feller turned six-string -- is waiting to be picked up for a lap slide session. And "Brass Strings" is a guitar with a horn for a body that reminds him of the late James Brown.

From an article by John Beck


Side story Some time ago while playing music at a holiday event, a young woman approached me and asked me what song I had just finished playing and without thinking much about it I said, "I mostly play sounds not songs"…. "Oh!" She said, "What's your favorite sound?",…what a great question!. There are so many sounds…I couldn't think of an answer.

A longer time ago I was playing at the grand opening of an industrial building sawing away on Bowling Ball Bass. I was set up in a long indoor corridor and the sound permeated throughout the entire building. A woman came running down the hall toward me yelling "Stop! Stop! you have to stop!. So I stopped. Turns out my music was frightening to her, poor woman. Not the best review. 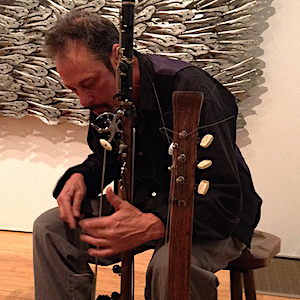 Champion of recycled and castaway heirlooms, assemblage artist Monty Monty is known mostly for his whimsical and magical sculptures. His assemblage art has often crossed over into the realm of musical instruments and his music has been described as “A cross mix of exploratory electro-eco-blues and sci-fi sound tracks that engage the senses”.

Monty enjoys an occasional gig at parties and special events. He lives and maintains his art studio in Northern California where he continues to explore new ways to create and make music from old things.