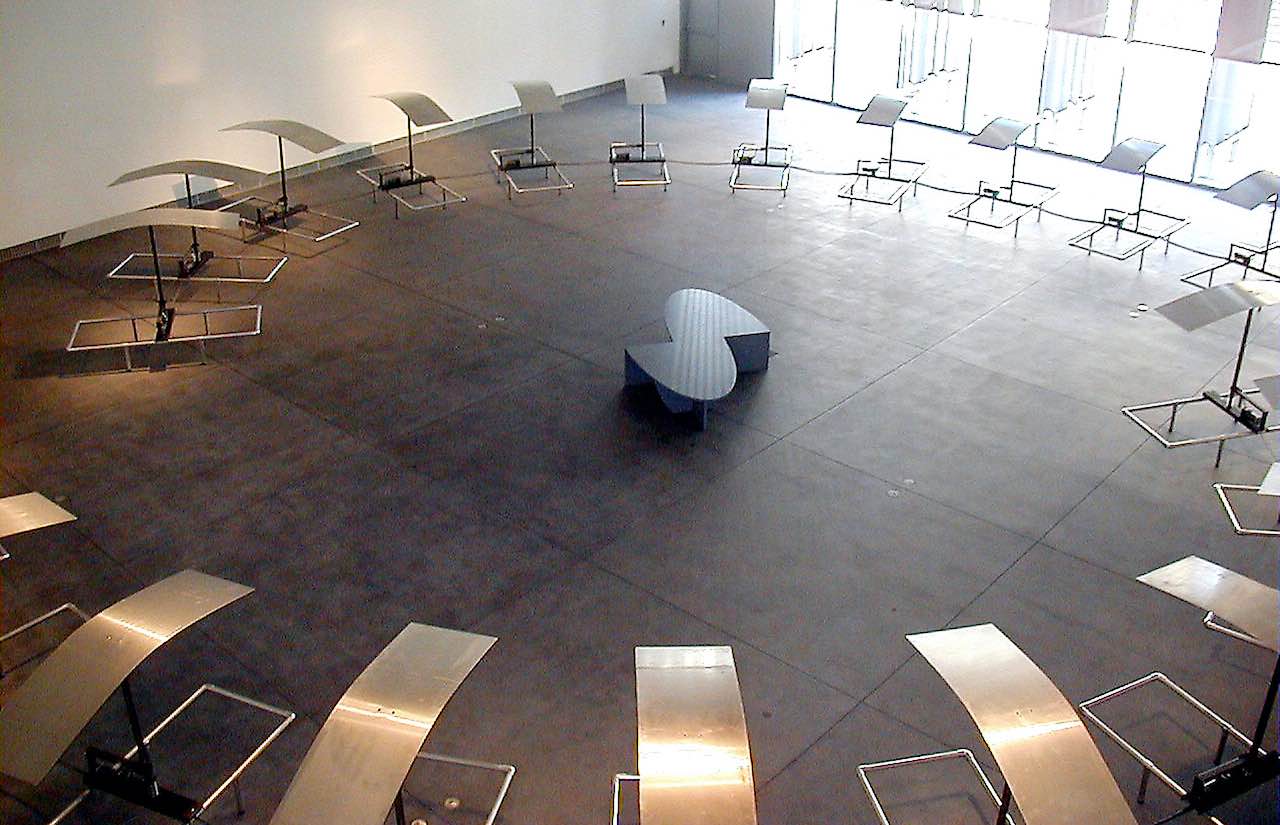 Each Bird was composed of a 2'x 7'sheet of aluminum mounted on a motor driven pole that could move at varying speeds. This produced a sound everyone is familiar with when a sheet of metal is shaken.
My goal was to create a situation where this sound could envelope visitors.

2 lines of 13 Birds were laid out along 2 involute arcs co-incident on the center of the 77' x 67' room. A push button on the wall started a motion sequence lasting about 3-4 minutes.

The mechanism for the Birds is a simple crank and rocker device which moves a
thin wall 2" steel tube to which the aluminum sheet is attached. This tube rides over a 1 1/2" tube with plastic guide bushings in between them. At the bottom is a large coil spring which reduces the load on the gearbox.
The rocker is powered by a 90vdc motor into a speed reducer. The motor is driven by a industrial servo motor controller using PWM for speed regulation.
A Mac computer running a MIDI sequencer from Opcode Systems. Continuous controllers out of the sequencer are converted into 0-10v signals in custom built MIDI interface.

There were a couple challenges to installing the work in the Yerba Buena I had to deal with.
First I had imagined just drilling lags into the concrete to anchor each machine but I was told the floor had just been refinished and couldn't even be scratched

Second since the Yerba Buena is a public space I had to provide safety so if a sight impaired person were to visit they would not be struck by the flapping aluminum.

I came up with a 2 birds with 1 stone solution. A rectangular frame 2 1/2' x 8' made of aluminum speed rail with 4, 8" legs on the bottom was assembled. The Bird was bolted to this and large rubber plugs were inserted into the bottom of the legs. The Bird stayed put, a person using a white cane would touch the frame before encountering the Bird and the floor was protected.


Side story Birds were about taking a familiar sound and producing it with machines that seem to have some sentience and to create an installation in which the visitor would have a greater sense of immediacy due to the number of Birds, the volume of sound and air movement.

This was the first time I did a show multiples of just 1 machine. The room was 67' x 77' and between that and the budgeted funds I able to make 26 Birds.

The Birds were spaced along 2 involute arcs and positioned so visitors had to walk around the outside to reach an opening that gave passage to the inside of the arcs.
All of the servo drives and a computer running Studio Vision Pro were placed in a back room so the only objects in the main room were 26 Birds and bench in the center.
A push button on the wall would cause a solenoid to strike a keyboard and start a motion sequence of about 3 1/2 minutes. There was a lockout so multiple keystrokes could not be recorded.

I had imagined bolting the Birds to the floor but was informed that was not possible and they had to be free standing. Also the building is a public space therefore I had to take into account the potential sight impaired visitor using a cane to move about. I solved this by creating a stand for each bird from aluminum speed-rail tube that was slightly larger than the wing thus would be felt before the aluminum sheet was encountered. Legs with rubber ends off the frame completed a stable base.

Messing around with sheets of metal

Hard to say exactly - all in all, experimenting, design, getting the show, designing the layout working out interface, sourcing, purchasing, fabrication, installation - 5-6 months