Aerodrones is a sonic Performance of about 30 minutes, performed by a musician and an extravagant wind instrument, specially designed for the piece. 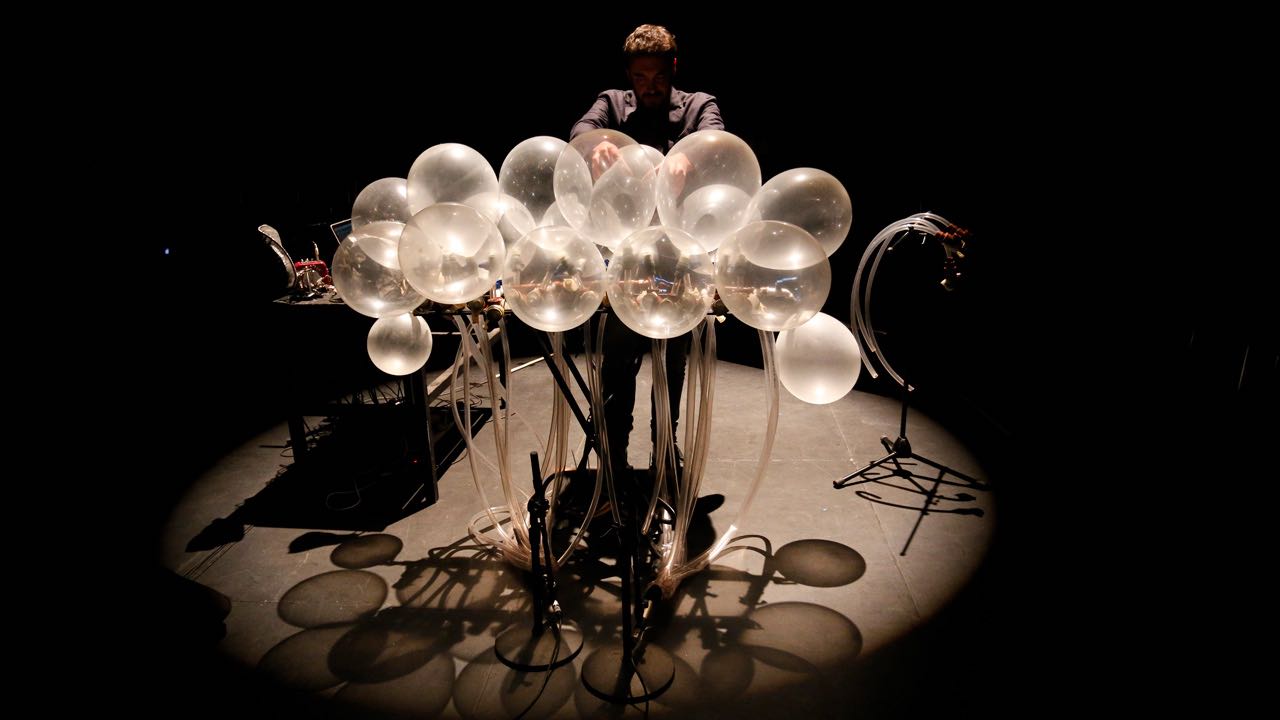 Aerodrones is a sonic Performance of about 30 minutes, performed by a musician and an extravagant wind instrument, specially designed for the piece.

The performance, which finds its background on experimental music aesthetics, Drone Music, Soundscapes and Noise, combines an immersive and deep sonority with certain fantastic imaginary given by the translucent and volatile appearance of the instrument. Balloons, valves, Accordion-like pleats and hoses are combined in a musical machine that demands the body of the performer to undertake the roles of motor and operator simultaneously.

Once the ‘sound-machine’ is running, the Aerodrones takes place of the sonic space as if we were listening to a ‘choir of ships & trains performed by a fragile retro-futurist device which demands the constant action of the performer. Here it lays, perhaps, part of the humorist tone of the piece: by contrasting the imaginary of fragility with a progression of low frequency clusters. In this sense, Aerodrones rise questions about the limit and appearance of the instrument and the expectations about its potential sound. This tension, after a few minutes, turns into an hypnotic sonic voyage.

Aerodrones is a polyphonic wind instrument, the layout is horizontal, and it is performed by means of baloons, valves, pleats and transparent hoses.

The performer allows the air movement to the interior of the instrument by means of two pleats and accumulates, en several buffers the air inside the baloons in a form of potential energy that may be liberated by the performer according to the performing needs by activating the valves. Thus, shifting sonic textures of voices that fade in and out are produced, building up a sonic landscape with acoustic, which finally is amplified by two microphones and a PA.

The performance is , by the sonic product of the manipulation of the machine and its several resonators, and on the other by its physical transformation: The Machine grows and declines. It could be described has a process of air circulation with sonic and visual outcomes, according to the breathing of a musical machine which appearance is modified during its use and involves the performer’s body as the necessary engine so it can sound.

ORIGIN:
Aerodrones was developed as a performance for a sonic intervention in an interactive space/ installation called ‘ Another Place’ (‘Lugar Otro’) ( http://www.facebook.com/LugarOtro ) organized by the artistic collective Cooperativa Disentida (cooperative dissent).

The investigation about the sonic possibilities of the materials involved in the setting of Lugar Otro (a big net hanging for the roof built with rings of transparent hoses, which could be passed through) inspired me to create a big wind instrument, with multiple resonators which I called Aerodrones and to design a performance with the same name. Aerodrones is a combination of the sonic and physical limitations of one material in particular (the hoses) and the necessity of a control interface that would allow me an effective and poetic manipulation of the air stored in the balloons and the sound they produce. 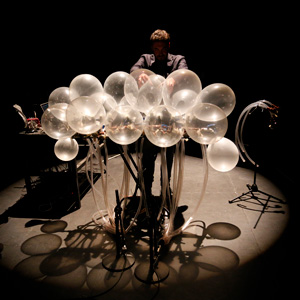 Javier Bustos is an artist, composer, performer and professor from Buenos Aires, Argentina. His work explores poetics of listening and sound production through the use of new media and low tech technologies, operating between experimental music, installation and the scenic-multimedial arts.


Connect with Javier Bustos
How I can help you:
I make, experimental instruments and sound devices for performances, installations and performing arts. I teach experimental lutherie workshops