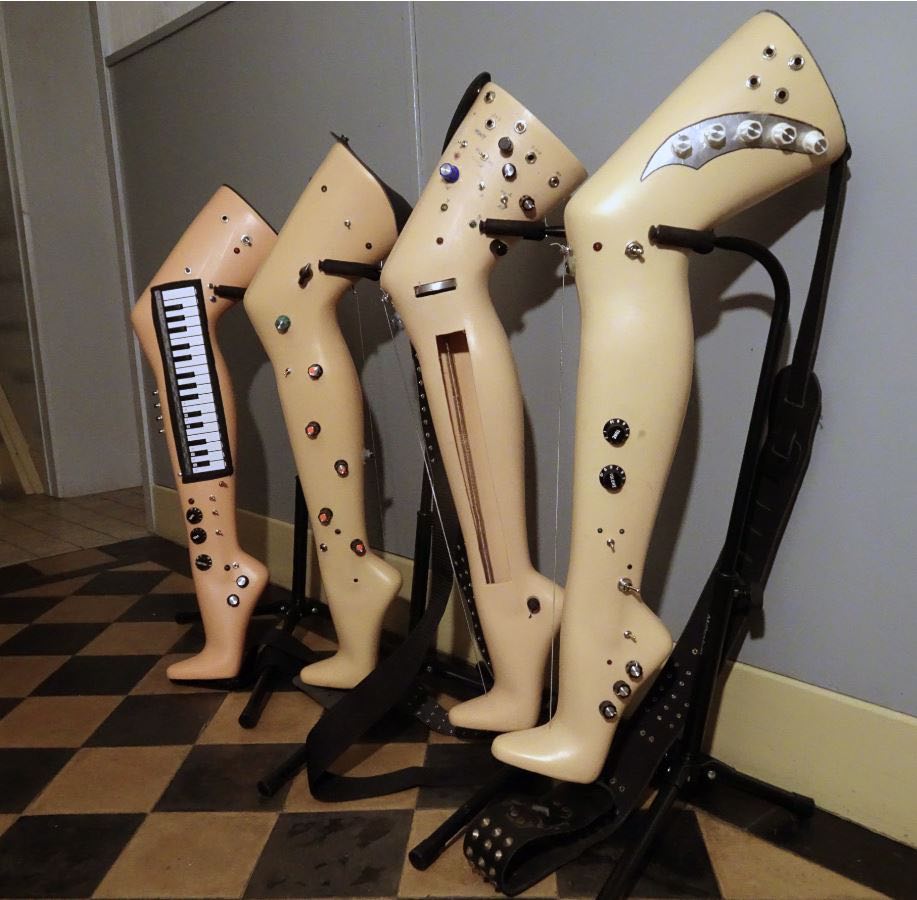 The down-to-earth feminine performance moves on a large scale, incidentally referring to the background of the subtle numbering and giving Rosa Luxemburg a leg up: a spectacular stage show for a wide audience!

The lower the den number, the more transparent and fine the product is. The higher the number, the more opaque the stocking is. Pantyhose with only 8 den are just a hint and particularly finely worked. Opaque are fine stockings with 50 den or more, through which no skin shimmers. 120 DEN are therefore opaque and with the number 120 also refer to the noise character of the musical output: at 120 decibels is the pain threshold of the human ear. 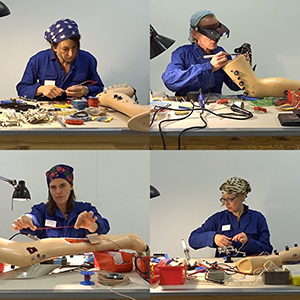 We are „4 Frauen, 12 Beine, 120 DEN!“ (en: 4 women, 12 legs, 120 DEN!)
Tina Tonagel , Britta Fehrmann, Conny Crumbach and Gesine Grundmann founded this bandproject in 2019.
We use selfconstructed mannequin legs as instruments. Each leg has an inbuilt arduino-based synthesizer/ soundgenerator with 6 potentiometers which control frequenz, oszillator, filter, volume and modulation.
The prototype is only using an arduino nano and MOZZi library, but we are busy with building the next leg level, it will be with teensy and teensy audio shield, so we can also use samples and a larger scale of sound effects. Furthermore we want to install different effect devices (distorsion, tremolo etc.) directy into the leg. They will be connected with patch cables (as a funny reference to modular synthesizers).
The guitar string can be tuned with a guitar machine and is amplified with a single coil pick up. The integrated piezo contact microfone amplifies every sound we play directly on the leg, for example stroking the leg or blowing into it.
Guitar-string and piezo are amplified with a small lm386 audio amplifier (inside the leg). A switch selects which source is active and one potentiometer controls the volume.
The arduino soundmodule don't need a seperate amp and can be played simultaneous to guitar or piezo, but also independent. There's one output, 6,3mm Jack.
Our leg fleet has grown steadily since the band was founded and now includes nine different legs, richly equipped with effects (overdrive, distortion, delay, tremolo): in addition to the four guitar and synthesiser legs, there is now also a keyboard leg (Circuit Bent Casio-SA2), a can leg based on a Bengali gopichand, a leg that is equipped with a spring, a Teensy-based synthesiser leg and a percussion leg.